Where Commercial Meets the Community

The Bloomer Chocolate factory is located int ther Fulton River District of the near northside of Chicago. When the wind blows just right the wonderful aroma of chocolate can be witnessed downtown.

I wonder how long the factory will remain. It is now surrounded by condo complexes with more to arrive.

Posted by Brokecompsoul at 4:16 PM 2 comments:

With Saturday being a total wash out I didn't know what to expect for today. We had some thunderstorms around 1:00am and it remained cloudy until noon. Then the Sun broken out and heated everything up.

Today was the 29th annual Summertime Chinatown Festival down Wentworth avenue, featuring items for sale and tasty food. The Highlight event which was scheduled for 12:30 was the Dragon Dance. The photo shows the arrival of the Dragon onto Wentworth as it turned off of Cermak Road. It turned out to be a great day for a festival

Posted by Brokecompsoul at 2:32 PM No comments:

The Center of Fast Food in Brighton Park 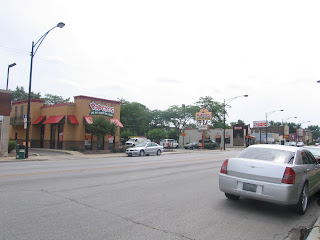 Ok maybe it's not really the center but on the left you have a Popyee's and on the right a Dunkin Donuts. This corner of Archer and Spaulding has been ocuppied by fast food chains for at least 40 years. The Popyee's buidling is less than 5 years old and sits on the site of the former Burger King #182. The Dunkin Donuts was built as a Kentucky Fried Chicken outlet.

I started my working life at the Burger King that was once on the Popyee's site. In fact the owner of the Popyee's was the head manager at the Burger King. The Kentucky Fried Chicken was relocated to 47th Place and Kedzie and the place was a Lalos's Taco Place for a while. It had been closed for a few years and I was surprised it was refurbished into a Dunkin Donuts.
Posted by Brokecompsoul at 5:45 PM 1 comment:

The 4th of July weekend didn't lend itself to great photo opportunites. I had problems at the apartment on Friday and Sunday was too hot. Saturday was ok and so I decided to go down to the old hood and photograph Archer Avenue.

Brighton Park's main business district was Archer Avenue from Kedzie to California. Here at Sacremento we have perhaps the most impressive structure on Archer Avenue. The Old Standard Federal Savings (Later Bank) I believe Standard Federal had sat on this corner since the mid 1920's. I remember in the mid-80's when I first got an account at this S&L being impressed by the 14-15 teller windows.

Standard became a bank after the S&L crisis. It remained indepedent for another 10 years and then TCF came to town and bought them out. I haven't been impressed with TCF. In fact I hate them but since it hard to change checking accounts I remain. The last time I was in the lobby of this impressive building, TCF had two tellers working. What a waste of space :(

Posted by Brokecompsoul at 6:05 PM 2 comments:

The Fourth has come and gone and all the fireworks by now have been blown up. It's been an intersting week. On Monday night I had to call the fire department because there was smoke in the hallway. They best determined it was caused by fireworks thrown in the hall.

Then my 4th of July was hampered by lack of power. I guess the wiring got loose. shrug.

Posted by Brokecompsoul at 7:11 AM 2 comments: