It's that time again It's new computer build time. I picked up this case at Best Buy on Sunday. It's an aluminum full tower case and has room for 6 optical drives and 6 hard drives. This thing is massive. Over the next couple of months I'll purchase my parts for this system. I plan to assemble it around Memorial Day.

I may build my first dual xeon system with this case. I've budgeted 1400 dollars for this feat and it will be tight the server motherboard alone is 400 and two Intel Xeon 5405's go for 480. It's just cool to think about what 8 cores could do for me. :)

Posted by Brokecompsoul at 6:09 PM 2 comments:

On Saturday I got the opportunity to walk the I & M canal in Lemont as well as walk around Lemont.

This sign was in a store window. Is Lemont destitute? Wow we finally have milk, bread and eggs available. What were people eating? Very strange sign indeed.

It's Easter Sunday, which has fallen almost as early as possible. March 23rd this year. The earliest it can fall is the 22nd.

Since Easter was so early, the weather tends to be cooler. Easter was in the lower forties and as you can tell nothing is in Belmont Harbor. Actually, that statement isn't true. Just south of this location a few small sail boats were in the water. I don't know what the reason was and I wonder if it was tied to the holiday.

A few more weeks and these piers will be filled. I'm looking forward to that.

Today was the CTA's big shuffle of bus routes. The #8 Halsted had been running out of the 74th street garage running the vintage '95 Flxible buses.

Starting today the 8 has been moved to the Kedzie garage and are running the brand new 1000 series New Flyers. The Kedzie garage also have some 7500 series NABI's. I'm stoked. I rode from 33rd and Halsted up to the end at Broadway. I just got off the bus on the left side of the photo. The bus to the right was already there. Too bad the 44 is still at 74th since this is the route I take the most :(

Posted by Brokecompsoul at 6:09 PM No comments:

After a rainy and snowy period I finally got a chance to go to Halsted street after work on Wednesday.

The Sears Tower must be my favorite object to photograph. I try to capture the building from as many vantage points as possible. This photo, taken on Halsted near Hubbard looks southeast. In the forground is some of the new construction that is happening west of the loop. These days Halsted street might as well be the western edge of downtown.

Posted by Brokecompsoul at 4:00 PM No comments:

Not Really a Jewel

When I arrived to work Monday morning I was greeted by the Landmark plaque at the doorway. The plaque seemed to gone missing several years ago when the city forced the landlord to restore the front facade.

If my memory serves me, this plaque used to be near the alley to the left of the building. In it's new location it won't harm the recreated front facade. While the exterior of the structure can be restored, there's not much hope for the interior. I don't think an original detail is left and this makes me sad. It's sort of cool though to work in a Landmark.

Posted by Brokecompsoul at 6:41 PM No comments:

I took this picture of the original Armour Institute from the red line. The Armour Institute was located at 33rd and Federal. Named after it's benefactor, Armour, from meat packing fame, today the much larger Institute is known as IIT.

Armour gave one million dollars to pastor Frank W Gunsualus, after rising to the challenge that Mr Gunsualus offered in a speech that is now known as the million dollar speech. Frank Gunsualus who was the pastor at the well to do Plymouth Church, whom Armour was a member. Gunsaulus wanted to start a higher education program for the common man, not only the well to do.

The Institute's original buildings date from 1893. The only stipulation that Armour set forth was that Gunsualus had to be the Institute's first President. The school first programs were Chemistry and Engineering.

Posted by Brokecompsoul at 4:23 PM 2 comments: 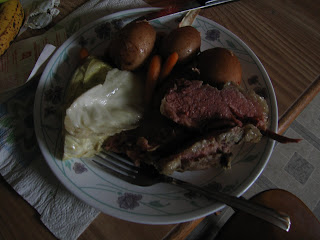 I know I'm a couple of days early, but if the parade is today I can celebrate today. Started this in the crockpot at 3:30 this morning and it was done by 11:00 just in time for lunch. I have a second brisket that i plan on cooking tomorrow. Not seen in the picture was the soda bread and the green river soda.
Posted by Brokecompsoul at 2:05 PM 1 comment:

It's Not Here Anymore

Other than memories, this is all that's left. - A plaque that says that the market existed. Future generations will have no idea what this area was like.

Posted by Brokecompsoul at 6:33 PM No comments:

With the change to daylight savings time I was a bit lazy today, so instead of doing laundry I decided to go to Target in McKinley Park and get some more clothes. I few weeks ago Target ran an ad that featured Converse shoes and clothes. Target is marketing them under the "One Star" brand. I didn't need another pair of sneakers since I already have around 16 pairs of Chuck Taylors but these were priced about 5 dollars less than a pair of All Star oxfords.

The kicks with their cool box 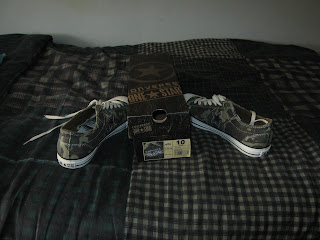 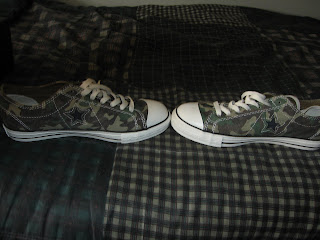 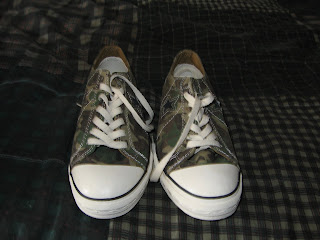 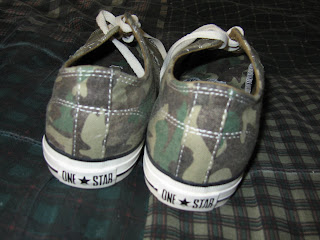 All in all I'm happy and they will look good with the cameo shorts :)
Posted by Brokecompsoul at 4:25 PM 2 comments:

This is the "new" Maxwell street, While pretty and much better than what it replaced, it's some what "fake".

What I mean by being "fake", well, first lets start with the street. See that red brick road well that's fake. It's asphalt painted red and designed to look like bricks. The streetscape is somewhat "fake" as well. The facades of buildings located on Halsted that weren't going to be saved were reused on the structures along Maxwell. In the end I guess this "fake" streetscape is better than used hupcaps being sold around garbage cans set ablaze.

The redevelopment of the Maxwell street area along Halsted has been a mixed bag. While the slum has been cleared, what has replaced part of it are near million dollar homes and half a million dollar condos. The heart of the area was the intersection of Maxwell and Halsted.

The picture shows the northeast corner and four of the saved building. Today the ground floors of these structures contain restaurants. If you were to look east down Maxwell you would find a parking garage at the east end with storefronts between Halsted and the garage. The facades of several buildings that were located on Halsted but deemed unusable to save, have been erected here.

It would have been nice to have saved more structures than they did, but the area is a lively today as it was when it was an area to buy cheap crap.

Posted by Brokecompsoul at 5:46 PM No comments:

When you go through Pilsen on Halsted and look west you'll see a church steeple with windows for a roof. What you can't see from a distance is the fact that this is just a shell of a church.

Located at 19th and Peoria, the former First Zion Luthern Church was destroyed in a fire in 1979. In 1998 strong winds knocked down the side walls. What remains is the front wall and the foundation of the rest of the structure. Owned by John Podmajersky, it has been renamed the Sanctuary. I'm not sure what the long term plans for the site are. Hopefully what remains will continued to be preserved. 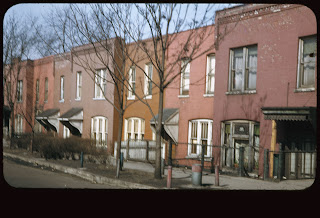 The picture above was taken by Charles Cushman in 1949. Charles was a renowned photographer who took many pictures in the U.S. and in the rest of the world. Today the University of Indiana has his photos available online. One of Cushman's legacy's is his collection of photos he took of Maxwell Street. If you see a photo of pre-demolition Maxwell street it more than likely to be Cushman's work. Many current amateur photographers are re-creating the scenes that Cushman had shot, as I went through his collection of photos I found three that were taken in the Bridgeport neighboorhood.

The photo below of the intersection of 32nd and Lowe was taken the last weekend of February 2008. It is my recreation of one of the three photos that Cushman took. Both photos contain a large cylinder that is cemented in the ground. Today there are several intersections that people have placed similar "crash" barriers into the sidewalk. Cushman's photo shows this cylinder is painted a sort of grey color, today it is rusty. I hope to recreate the other two photos in the near future. 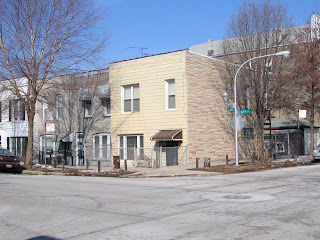 Posted by Brokecompsoul at 4:11 PM 2 comments: